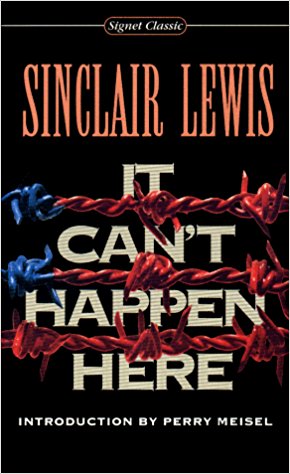 Published in  1935, the novel has recently re-entered best seller list.  It explores Depression era America, and the free-floating anxieties that worried citizens for several years as the country stumbled through economic turmoil  desperately seeking solutions after the Crash of 1929 and the economic contraction that followed.

Lewis was intimately familiar with these concerns because his wife, the journalist Dorothy Thompson, had famously interviewed Hitler in Berlin between 1931 and 1935 and published a series of articles describing his rise to power after the collapse of Weimar; her series warned Americans about the potential of an effective propaganda machine.

It Can't Happen Here is Lewis' s warning about the risk of a populist demagogue coming to power in America and how an appeal to make America great again brings with it known and unknown risk.