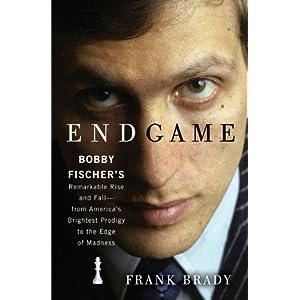 Brady’s insightful biography of the legendary chess player focuses more on Fischer’s life as a chess champion than on his much-publicized legal troubles and alleged psychological breakdowns. Brady first became friends with Fischer at a chess tournament when they were both children, and he combines a traditional biography with a personal memoir. Fischer began playing chess at age six and was soon playing games by himself, unable to find worthy competition. He seems to have had a lifelong battle with himself, and his biggest challenge may have been conquering not his competitors but his own intellect. Brady is uniquely qualified to write this book. Not only is he a seasoned biographer and someone who knew Fischer on a personal level; he’s also an accomplished chess player himself, able to convey the game’s intricacies to the reader in a clear, uncomplicated manner. The book should appeal to a broad audience, from hard-core chess fans to casual players to those who are simply interested in what is a compelling personal story. --David Pitt