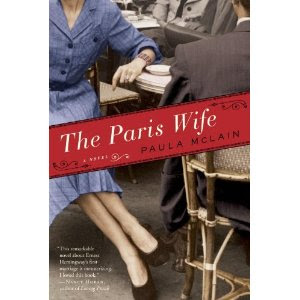 This month we will be reading "The Paris Wife" by Paula McLain. To RSVP and to receive future invites please email Kelly

Author Paula McLain on The Paris Wife Most of us know or think we know who Ernest Hemingway was -- a brilliant writer full of macho swagger, driven to take on huge feats of bravery and a pitcher or two of martinis -- before lunch. But beneath this man or myth, or some combination of the two, is another Hemingway, one we’ve never seen before. Hadley Richardson, Hemingway’s first wife, is the perfect person to reveal him to us -- and also to immerse us in the incredibly exciting and volatile world of Jazz-age Paris.

The idea to write in Hadley’s voice came to me as I was reading Hemingway’s memoir, A Moveable Feast, about his early years in Paris. In the final pages, he writes of Hadley, “I wished I had died before I ever loved anyone but her.” That line, and his portrayal of their marriage -- so tender and poignant and steeped in regret -- inspired me to search out biographies of Hadley, and then to research their brief and intense courtship and letters -- they wrote hundreds and hundreds of pages of delicious pages to another!

I couldn’t help but fall in love with Hadley, and through her eyes, with the young Ernest Hemingway. He was just twenty when they met, handsome and magnetic, passionate and sensitive and full of dreams. I was surprised at how much I liked and admired him -- and before I knew it, I was entirely swept away by their gripping love story.

I hope you will be as captivated by this remarkable couple as I am -- and by the fascinating world of Paris in the 20’s, the fast-living, ardent and tremendously driven Lost Generation.

A Look Inside The Paris Wife

Guest Reviewer: Helen Simonson on The Paris Wife Helen Simonson is the New York Times bestselling author of Major Pettigrew’s Last Stand. She was born in England and spent her teenage years in a small village in East Sussex. A graduate of the London School of Economics and former travel advertising executive, she has lived in America for the past two decades. After many years in Brooklyn, she now lives with her husband and two sons in the Washington, D.C., area.

Paula McLain has taken on the task of writing a story most of us probably think we already know--that of a doomed starter wife. To make life more difficult, McLain proposes to tell us about Ernest Hemingway’s first wife, Hadley Richardson, who is a twenty-eight-year-old Midwestern spinster when she marries the twenty-one-year-old unpublished, (but already cocksure) writer and runs off to Paris with him. The talent and joy of this novel is that McLain does a startling job of making us understand this as a great love story and seducing us into caring deeply, about both Ernest and Hadley, as their marriage eventually comes apart.

This novel moves beyond the dry bones of biography or skewed personal vision of memoir, and takes a leap into the emotional lives of these characters. It is a leap of faith for those readers who think they know Hemingway, but McLain’s voice sticks close enough to historical material, and to the words and tone of Hemingway’s own writing, to be convincing. She had me at the description of young Hadley’s father committing suicide.

“The carpets had been cleaned but not changed out for new, the revolver had been emptied and polished and placed back in his desk.”

Hadley is also crippled by a childhood fall and trapped into spinsterhood by her mother’s declining health and eventual death. By the time she meets Hemingway, we are rooting for her to make a break for foreign shores--even as we understand the danger of marrying a tempestuous man. Hemingway is all nervous purpose, ambition and charisma as he meets Hadley and is drawn to her quiet strength and ordinary American sweetness. In his youth and uncertainty, she is his rock and yet we already suspect that as he grows in artistic power, she will become an unwanted anchor. Through Hadley’s eyes and plain-speaking voice, we see all of twenties Paris and the larger-than-life artists who gather in the cafes. We drink tea with Gertrude Stein and champagne with Fitzgerald and Zelda. We run with the bulls in Pamplona and spend winters in alpine chalets. And we see, through her love for him, the young writer becoming the Hemingway of legend. Perhaps it is the nature of all great artists to be completely selfish and obnoxious, but Hadley’s voice is always one of compassion. Even as Hemingway leaves her completely out of The Sun also Rises, even as Hemingway publicly flirts with other women, she continues to explain and defend him. It is a testament to Paula McLain that the reader is slow to dislike Hemingway, even as he slowly and inexorably betrays Hadley’s trust.

I loved this novel for its depiction of two passionate, yet humanly-flawed people struggling against impossible odds--poverty, artistic fervor, destructive friendships--to cling on to each other. I raise a toast to Paula McLain’s sure talent.